Due planning and implementation of the reforms, through tactical goals, available resources, and logical approaches constitute important factors of effective public administration.

Public administration reform in Georgia was initiated in 2015 after the signing of the Association Agreement between Georgia and the European Union, according to which the country should implement substantive reforms in the fields of public administration and public service. In order to fulfill this obligation, in 2015 the Government of Georgia approved the Georgian Public Administration Reform Roadmap 2020. The document aimed to create a comprehensive conceptual framework and mechanisms by 2020 that would lead to transparent, predictable, accountable, and effective governance, meet the needs of the public, and be in line with European standards.

The aim of the study is to study the models of successful European countries in the directions of Policy Planning and Coordination, Accountability, Public Service Delivery, and Public Finance Management and based on the analysis of their public administration systems, elaborate recommendations for supporting effective implementation of the Public Administration Reform in Georgia.

Main findings in the directions of Accountability and Public Service Delivery:

According to the United Nations e-Government Development Index for 2020, Denmark, South Korea, Estonia, Finland, and Australia are in the lead.

Finland, Iceland, the Netherlands, Canada, Sweden, New Zealand, and Denmark are the leading countries in terms of public services according to the index published by Global Economy for 2020. 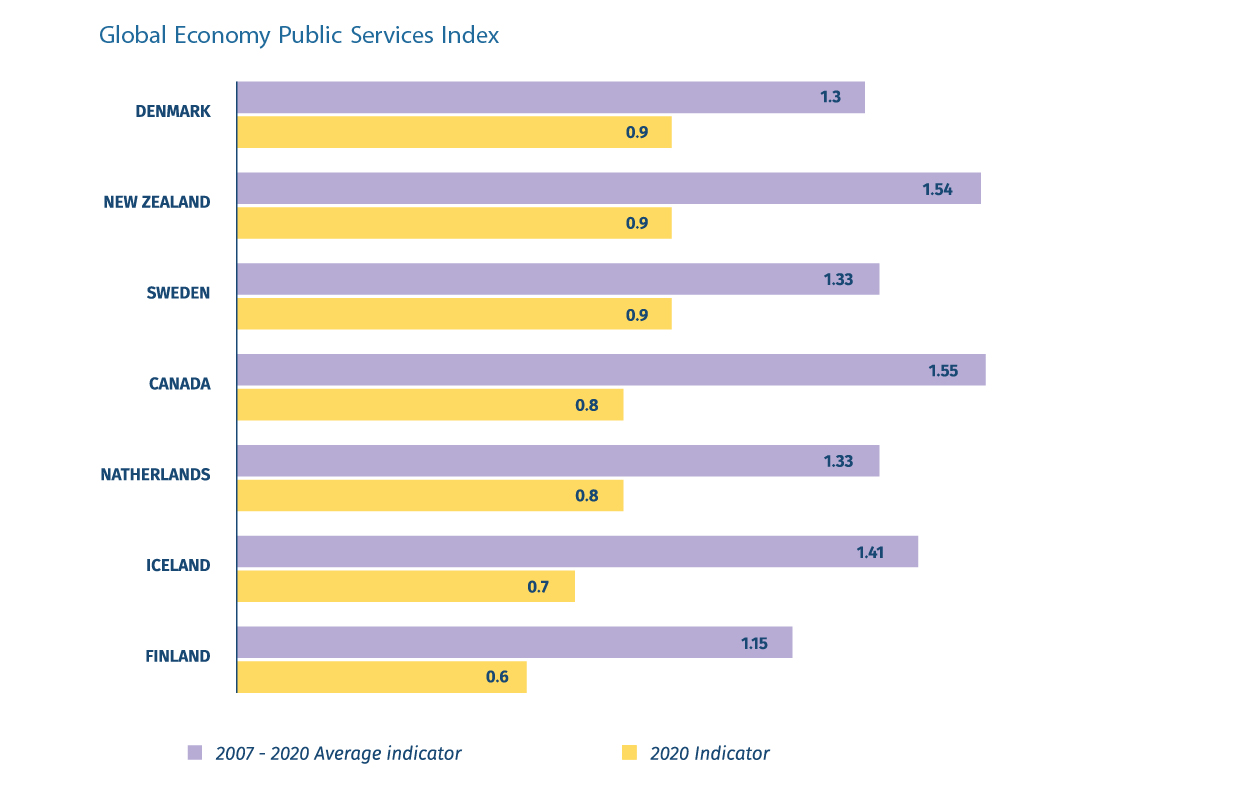 According to the data from the World Governance Indicators for 2019, Norway, Sweden, Finland, Denmark, and New Zealand are in the lead in terms of accountability; In terms of government effectiveness - Singapore, Switzerland, Denmark, Finland, and Andorra. 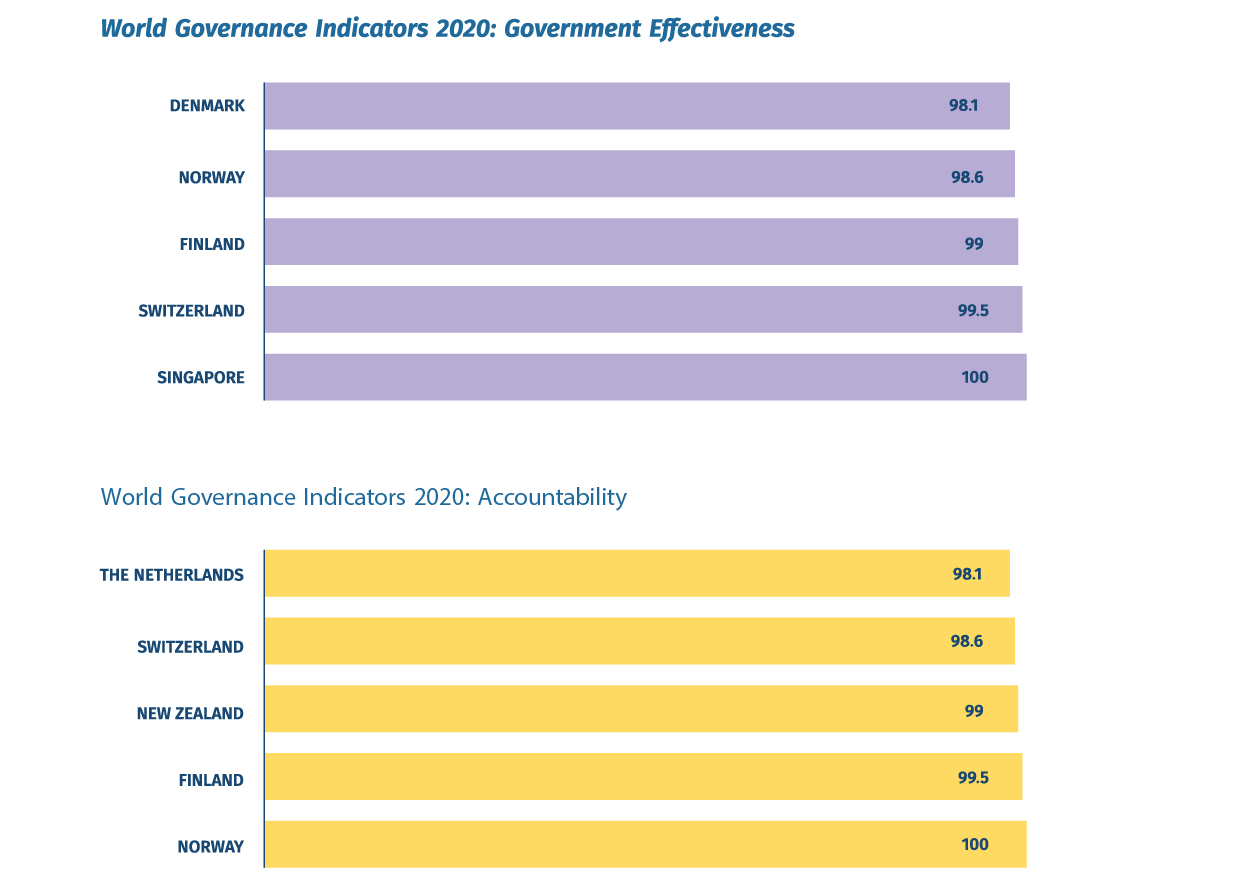 Findings of the analysis of public administration systems in successful European countries:

Relatively large-scale and systematic public administration reforms in successful European countries in the directions of accountability and public service delivery began in the 1980s and 1990s.

The main coordinating body for public administration in these countries is chiefly the Ministry of Finance. The various directions of public administration are prioritized in the countries under review. Governmental or non-governmental institutions in the form of councils, agencies, and organizations are established to improve governance efficiency and promote the development of e-governance.

For most of these countries discussed, the development of information and communication technologies (ICT) and, consequently, the digitization of governance, which is crucial in terms of improving public services and increasing accountability, have been a priority in parallel with the launch of public administration reform.

The European countries covered by the study are making a significant effort to digitize all areas and make the most of information and communication technologies as a mean to reduce administrative costs and improve the service delivery.

The regulatory policies in these countries have been refined along with the implementation of the public administration reform. The involvement of relevant stakeholders in the legislative process in these countries is an integral part of the decision-making process. As a result of the development of digital technologies, citizens have the opportunity to participate electronically in political or legislative processes.

Freedom of information is highly guaranteed in the countries considered. All European countries covered by the study regulate access to public information through independent normative acts. The countries also pay special attention to the access of open data.

Findings of the analysis of the public administration system of Georgia:

Public administration reform in Georgia began in 2015, after the signing of the Association Agreement between Georgia and the European Union. To the purpose of implementing the reform, the Government of Georgia approves the Public Administration Reform Action Plan once in every two years.

Despite the progress made in the field of public services, the absence of the unified standard for the creation and delivery of services is a significant challenge, as a result of which, fragmented development as well as a heterogeneous nature and inconsistency is characteristic for public services.

Offering electronic services to customers is no less of an important challenge in the country. In terms of introduction and use of online services, Georgia lags far behind not only international but also regional trends.

Main findings in the direction of Policy Planning and Coordination:

Direction of the policy development and coordination is the foundation of good public governance, the full implementation of which essentially contributes to the success of the overall reform.

The study was based in large part on an analysis conducted by the European Union that identified five leading countries across Europe. These include three Scandinavian and two post-Soviet countries. In particular, Denmark, Finland and Sweden represent countries with great history of democracy. On the other hand, Latvia and Lithuaniastand out due to their post-soviet experience, who managed to transition onto the rails of democracy.

The research project did not reveal a uniform practice on all issues in the field of policy planning and coordination based on the experience of the states examined within its scope. Nevertheless, it was possible to identify good examples, the adoption of which would substantially improve the quality of policy planning in Georgia.

Main findings in the direction of Public Finance Management:

In most EU member states, the government adopts a medium-term fiscal plan and sends it to Parliament for consideration, however, it does not require parliamentary approval. Nevertheless, there is a group of countries (Austria, the Czech Republic, France, Greece, Latvia, Lithuania, Luxembourg, Romania, Slovenia, Sweden and the United Kingdom) where such parliamentary adoption is necessary.

Vast majority of the country-specific MTBFs cover a period of three years, i.e. from t+1 to t+3 (t is a year to be planned). Furthermore, in quite a number of Member States the budgetary authorities are obliged to present plans for the coming four years (Austria, Denmark, Estonia, Finland, Germany, Greece, Italy, Luxembourg, the Netherlands and Portugal).

The planning documents of Finland, the Netherlands and the United Kingdom cover a fixed period of time beyond the budget year, and they are not being extended on a rolling basis.

The fixed aggregate ceiling approach currently used by Sweden, Finland, Netherlands, and Austria fixes a binding limit on all or most central government expenditure for two or more years, and is not revised during that period. This type of model is characterized by a higher degree of comprehensiveness and control at the aggregate level, but maintaining flexibility to revise and reallocate at the more detailed level.

Some EU Member States allow the carry-over of unspent appropriations in the following budget year(s)  - in Estonia the limit for such carryovers is set at 3% of the total expenditure (except investment projects and co-financing of projects partly funded by the EU), Austria foresees the to build unlimited reserves from any unspent appropriations.

Findings of the analysis of the public finance management in Georgia:

Public finance reform in Georgia, which began in 2004, has made significant progress over the years:

-      Fiscal discipline and fiscal rules have been established;

-      Program based budgeting process and quality have been improved;

-      Electronic system (ePFMS) for Budgeting, Treasury and other related areas has been developed and is operating;

-      The State Audit Office has transformed from the traditional control-inspection function to the new function of modern financial, performance and compliance audit in line with international best practice;

-      Within the management reform framework revenues and expenditures of budgets of every level (Autonomous Republics and local governments) and every budgetary organization (including LEPLs and NNLEs) have been transferred to the Treasury Single Account.

Despite the progress made in terms of public financial management, there are still some challenges in this direction, which were not fully reflected in the 2019-2020 Public Administration Reform Action Plan. Particularly:

-      The Country Basic Data and Directions (BDD) document, which is the main tool for medium-term planning, fails to ensure the accuracy of forecasts given its review procedures.

-      The finances of state enterprises that functionally provide public services are not included in the unified treasury system, which prevents the formation of a unified overall picture of the public finance management system.

-      The Action Plan for Public Finance Management lacks an important component to achieve accountability, such as oversight of budget execution by independent bodies

-      The plan includes neither a public procurement segment nor internal and external oversight (audit) mechanisms of public finance expenditures, which would the transparency of the relevant procedures.

According to the official data of the Open Budget Survey 2019, Georgia has score of 28 (out of 100) in terms of public participation in budget processes. The lowest score (0) is for the public engagement in budget formulation and planning process, indicating that the Ministry of Finance of Georgia, despite various working groups, is not able to provide a full-fledged mechanism for public engagement in the state budget planning.

Mechanisms for participation in the discussion of the formulated budget submitted to the legislative body are relatively effective (56). Georgia also has a high score in the engagement in the draft state budget or the progress/implementation process assessment by the State Audit Office (78). As for the involvement in the implementation of the state budget plan, the challenges are great and the score is correspondingly low - 0 points.

In tackling the challenges facing public administration in Georgia, it is important to elaborate ambitious commitments in the directions of accountability and public service delivery of the public administration reform strategic documents, and within their framework the Government of Georgia should:

- Make efforts to develop information and communication technologies and pay special attention to improving e-governance, which is crucial in terms of increasing the effectiveness and accountability of public services.

- Ensure the improvement and maximum digitization of public services, improve their accessibility, and encourage the use of electronic services by the public.

- Complete the reforms initiated years ago and include ambitious commitments in a new public administration reform strategy and action plan.

- Ensure the introduction of the practice of publishing public information in open data format and uploading the open data to the corresponding portals.

- To the purposes of ensuring transparency and accessibility of regulatory policies, develop a general rule for holding public consultations in the legislative process and ensure high public engagement in the decision-making process, including through the use of electronic means.

- A unified structural unit for strategic management and coordination should be established in all ministries of Georgia;

- The government administration should issue conclusions on the reports of policy documents developed by the ministries and should not limit itself to informal communication;

- Establish the practice of reviewing policy documents with the principle of high involvement. Specifically, with the participation of field experts, parties, and organizations; sign memorandums with civil society organizations within the framework of specific action plans/strategies;

- Create a special online platform, through the use of which outsider stakeholders will have access to the policy documents under consideration, will be able to submit opinions and receive feedback from decision-making bodies;

- Include descriptive paragraphs regarding the goals in the action plans along with indicators that would enable the assessment of their impact.

- Public participation in budgeting and inclusiveness of the process should be ensured from the budget formulation stage.

- Information on fiscal risks should be added to the draft state budget. For example, information on transfers to state enterprises, their quasi-fiscal activities, and fiscal year tax expenditures.

- The body responsible for improving citizen participation should also focus on the principles of the Global Initiative for Fiscal Transparency Initiative (GIFT).

- Pilot mechanisms should be introduced to ensure public participation in the formulation of the state budget and monitoring of budget execution.

- The most vulnerable and under-represented groups of the society should be actively engaged in the budget process directly or through civil society organizations representing their interests.

- The Six-Months Budget Execution Report should provide up-to-date data on expected revenues by the end of the current year and compare them with the original forecasts.

- Public participation should be better ensured in the development of a citizen's budget guide.

- The BDD document should become more accurate in terms of forecasts and the need for amendments to the budget law should be minimized based on a proper planning process.